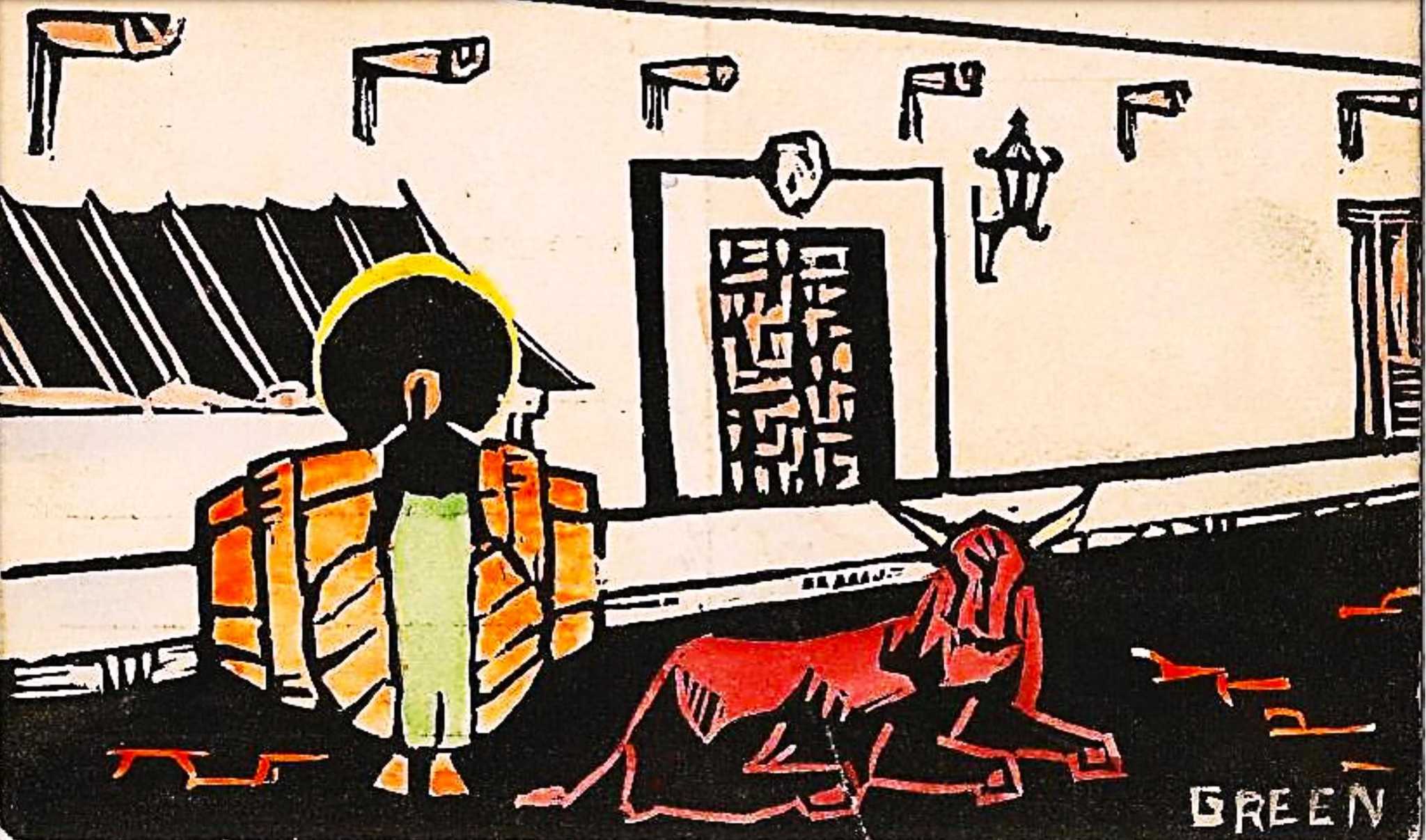 SAN ANTONIO- I have included a postcard with a scene from the Spanish Governor’s Palace which may have been created by Rena Maverick Green. Was it?

Mary Rowena “Rena” Maverick Green (1874-1962) was part of two influential families, as the granddaughter of Texas Declaration of Independence signer Samuel Maverick and wife of Robert B. Green, who had been Bexar County judge and was a state senator. at the time of his death in 1907. He died at age 41 on a hunting trip of “rheumatism of the heart” or rheumatic heart disease, probably resulting from a streptococcal infection.

His 33-year-old widow moved with their four children, all under the age of 10, to her parents’ ranch near Boerne. She returned to the city after a few years to become an influencer in her own right – as an activist, civic reformer, historical curator and artist.

More from Paula Allen: The San Antonio suffragist, a member of the progressive Maverick family, used her social status to advocate for herself

On the back of the undated card, the following is printed: “Centennial Scene/Spanish Governor’s Palace/Built in 1722/San Antonio, Texas. On the front, the person wearing a sombrero and the red beast lying in the street probably evoke the early days of this local monument, which served as the seat of colonial government here until 1804, when it was sold by the last captain of the Spaniard. military garrison. From then on it was used as a private residence and eventually housed businesses such as a saloon, pawnshop and tire shop.

Two of the city’s earliest organizations advocating historic preservation became interested in saving the old, neglected structure – the Texas Historical and Landmarks Association of Adina De Zavala (later the De Zavala Chapter of the Daughters of the Republic of Texas) and the Conservation Society.

The palace – so named by De Zavala during a campaign in the mid-1910s to save the Spanish royal relic – was in such poor condition that it was in danger of being demolished. De Zavala worked with local officials and businessmen and asked for contributions, but they were few and small — less than a dozen, at $1 to $5, as reported by the San Antonio Light. , June 19, 1917.

The fledgling Conservation Society wanted to avoid the appearance of direct competition, according to meeting minutes in the Rena Maverick Green Papers at the Briscoe Center for American History at the University of Texas at Austin. A library assistant said: ‘There was a reference to the omission of the Spanish Governor’s Palace from the Society’s (then) current campaign, as the Landmarks Association ‘were particularly interested and we did not wish to upset them’ .stated in the society’s minutes of September 4, 1924, an agreement was reached between the two preservation groups that would leave fundraising to a committee of businessmen, but “no (underlined) campaign n ‘resulted’.

But with Green as chairman of a citizens’ advisory council and $30,000 in municipal funds, the restoration was completed in 1930; and after years of wrangling between private and public interests, the renovated historic site was officially opened in 1931 and opened to visitors as one of the city’s oldest cultural attractions.

So is there a connection between Green and this postcard?

There is no mention of this in his Briscoe Center papers. Due to the title “Centennial Scene” on the back, I showed it to local historian Sarah Reveley, who collected Texas Centennial memorabilia from the 1936 celebration, including postcards, and made donation to the Briscoe Center. After reviewing her records, Reveley said she had never seen “Centennial Scene” postcards before and was not aware of a series with that name.

The signature itself – capitalized “green” – is ambiguous. The McNay Art Museum has one of his paintings, “Mama and Parrot”, from the collection of Marion Koogler McNay, whose bequest established the museum. Its online catalog describes the work (not currently visible) as a watercolor on paper, signed “Rena Green” at the bottom right, same position as in the photo of the Palace.

The postcard illustration “appears to be a woodcut, which would explain the use of carved capital letters,” said Lewis Fisher, author of “Saving San Antonio: The Preservation of a Heritage,” a history of the Conservation Society which covers the restoration of the palace. .

Although Fisher did not see any attribution to Green, he thinks the postcard is likely his work: “Given its close association with the Governor’s Palace, it is highly probable that it did, and I don’t know of any other contemporary local artist named Green.

No publisher’s name is printed on the map, so Fisher speculates it might have been privately printed to support the restoration, completed in time for its bicentennial celebration by the city, observing the arrival in 1731 of the inhabitants of the Canary Islands, the first civilian settlers of San Antonio.

In Fisher’s book there is mention of the palace’s first guardian, Josephine Rote, who had the idea of ​​commissioning “15 well-known artists to paint scenes in and on the palace”, for sale at $15 each, with proceeds from the paintings to fund the printing of postcards to be sold at the new tourist attraction. Conservation Society Librarian Beth Standiford found no documentation of Green as one of these artists, but she did find a clipping of a story in the San Antonio Express, March 15, 1931, announcing a project guide and quoting Rote that “Mary Bonner and other artists will paint images of the Palace, which will be reproduced on souvenir postcards.

If a Palace art project was done, Green had the chops for being asked.

She had studied in the 1920s in Provincetown, Massachusetts, and San Francisco with two notable artists – the sculptor/painter Maurice Sterne, whose works have been collected by the Museum of Modern Art in New York; and Charles Martin, who taught selected students including Georgia O’Keeffe. Presenting, teaching and working at the Villita Street Gallery from the late 1930s to the late 1940s, she was a member of the San Antonio Arts League and other artist groups.

From Paula Allen: En route to Texas fame, the San Antonio-bound ‘noble’ entertainer was anything but

Green exhibited frequently – paintings with the San Antonio Artists Exhibit and sculptures with the Texas Sculptors Group at the Witte Museum, where she won an award for her terracotta “grandmother”. Her watercolor, ‘Magnolias in Persian Vase’, won the Southern States Art League’s ‘Best Flower Painting’ award and has been exhibited throughout the region.

La Witte has none of his artwork, said Leslie Ochoa, director of collections, but the museum has received many donations of historical artifacts from him. A drinking gourd used by Samuel Maverick as a prisoner in Mexico after the 1842 Woll invasion is currently on display at the Cultural Mix Theater at the South Texas Heritage Center. During the 1930s, Green also gave Witte historical fashion pieces – a cape, apron, hat, handbag, fan, children’s clothes and horn buttons – worn by her or by members of his pioneer family.

His greatest gift was one of his last. In 1942, she donated a uniform, flag, badge and other items used by her late husband as captain of the Belknap Rifles, a militia founded in 1884.

Green never remarried and was always referred to as “Judge Green’s Widow” in accounts of the awards she won in 1959 and 1960. One of her last projects was “Robert B. Green: A Personal Reminiscence”, a book about her late husband. , published in 1962.

She died on November 3, 1962, of a sudden heart attack, according to her death certificate, which lists her occupation as a “housewife”.

For nearly half a century of her widowhood, she saw two world wars, the Great Depression, the invention of radio and television, space exploration and the development of antibiotics that could have extended life from her husband. On her own, she accomplished a lot…and probably never stopped wanting to tell him everything she saw and did.