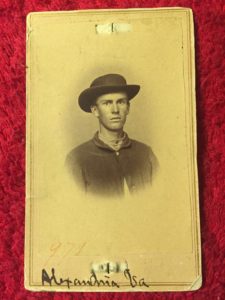 The photos that never made it home – InsideSources

The Yankee soldier looks at us with a hard glint in his eye. Stiff and weathered, it’s ready for action. No name, no date, no unit. Just a young man whose face shows the strain of war.

What makes this photo stand out is the “971” in faded red ink in the lower left corner, two blank spots at the top and bottom, and “Alexandria, VA” in vintage handwriting.

They indicate that the Civil War image is from the Post Office’s Dead Letter Office (DLO).

Postmen remained incredibly busy from 1861 to 1865. Some 2.5 million men served in the Union Army alone. Many wrote letters home. And the people there responded. Which means that tens of thousands of coins go through the mail every day.

But there were logistical headaches. Some soldiers were barely literate. Others had sloppy handwriting. They did not always display adequate postage. And many letters were misdirected. By the time some letters reached their destination, they were so poorly marked by various postmasters that they appeared to have come through the fight themselves.

Whenever one couldn’t be delivered, it ended up at the DLO in Washington. In operation since 1825, for much of the 19th century, it was, along with the Pension Office and the Patent Office, a must stop for DC tourists. He was so popular that he even had a small museum exhibiting oddities discovered inside letters whose owners have never been located. Like a loaded gun and a human skull.

By the end of the war, some 4.5 million postal items had accumulated at the DLO. Special clerks examined each for clues about the addressee that local postmasters had missed. When external review failed, clerks had the power, under a law passed by Congress, to open an envelope to see if the letter contained any clues to the identity of the recipient. These clerks were often women and ordained ministers, as they were thought to be more trustworthy when dealing with sensitive data. They were so good at their job that over 40% of DLO letters were eventually delivered.

Letters from soldiers sometimes contained photos intended for mothers, wives, lovers and friends. They have been saved and the images added to the DLO mini-museum.

Each soldier’s photo was numbered in red ink and attached with two brass clips to a cardboard bulletin board. Four rows containing nine images each, or 36 per page. It is estimated that there were somewhere between 5,000 and 7,500 images in all.

Visitors scanned the pages. If they met someone they knew, they received the letter.

The display was so successful that a special wooden crate was built to hold the photo panels. Emotions often came to the surface during viewing; women frequently sobbed as they sought the face of a lost loved one.

The photos were even taken at World Expos where tens of thousands of attendees saw them. Consider the 1898 Trans-Mississippi and International Exposition in Omaha, Neb., where a woman spotted an image of her father taken 35 years earlier. (This letter was returned to the elderly Indiana veteran.)

In 1902, another aging veteran claimed the letter he had mailed exactly 40 years earlier!

Veterans’ organizations, such as the Grand Army of the Republic (similar to today’s VFW and American Legion), and newspaper and magazine articles were also used to publicize the effort. .

A newspaper article reports that in all, some 2,000 letters were eventually delivered thanks to the photos.

But thousands more have not been claimed. When the Post Office moved to its new Washington building in 1911 (now a Trump Hotel, by the way), the DLO followed suit. His little museum, however, did not. With the Civil War becoming a distant memory, fewer people asked to see the photos. The screen has been stored. It was decided to sell the images in the 1940s. (Nobody knows what happened to the letters that inspired the display. They seem to have simply disappeared over the decades.)

A group of 300 DLO photos ended up in the hands of a New York bookseller after World War II. They were later sold to the George Eastman Museum. A second batch was acquired by a commanding officer of the Sons of Union Veterans. These images were eventually sold at auction in the 1980s.

Where do the Dead Letter Office photos come from? We’ll never know. The identity of the soldiers who were depicted there, or those whom they intended to receive their photographs, went to the grave with them. Maybe that’s why they look at us so sadly almost 160 years later. In their own way, their photos were also victims of the saddest of all wars.