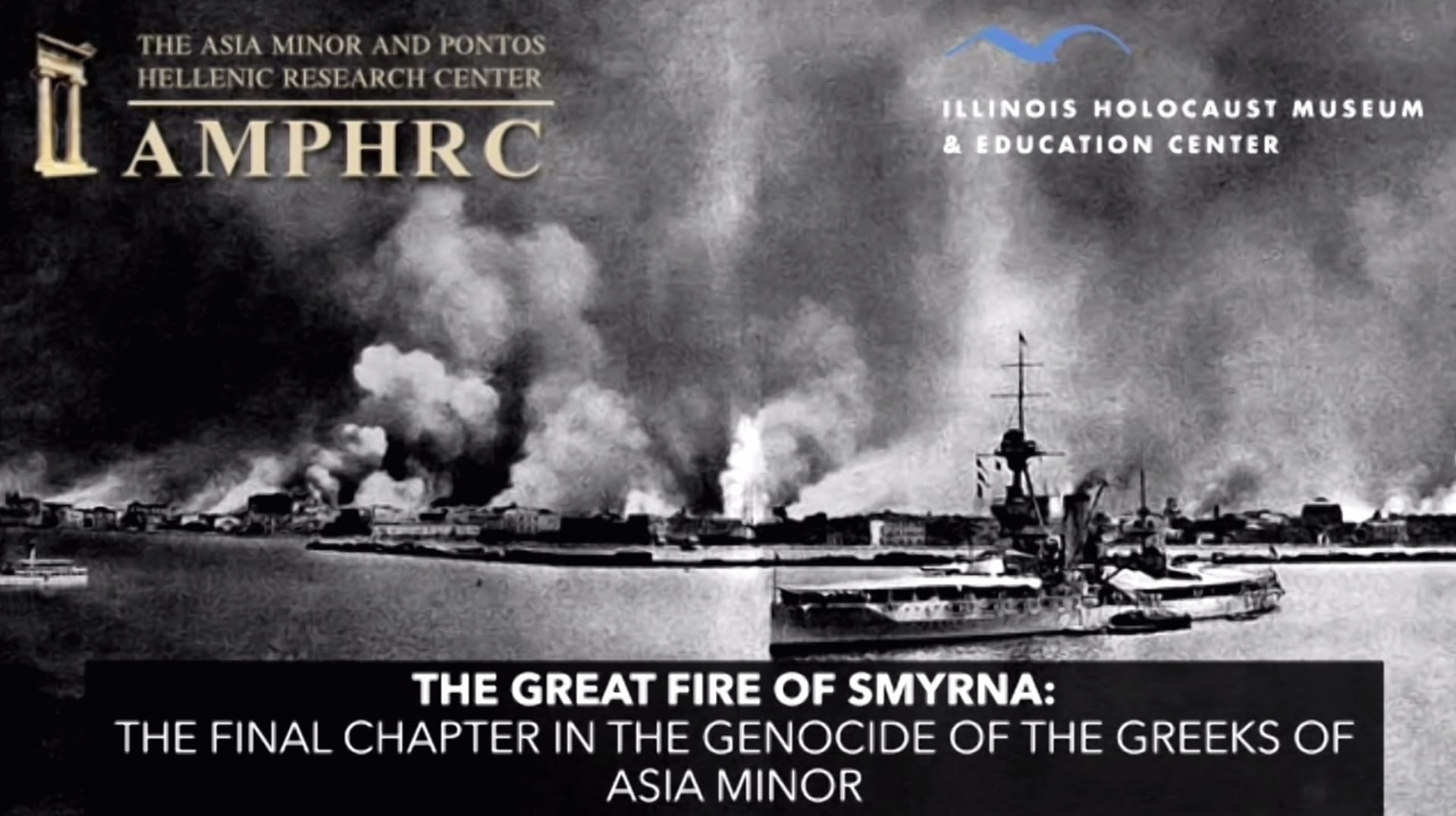 SKOKIE, IL – The Smyrna Centennial Remembrance Conference 1922-2022 was held in person at the Illinois Holocaust Museum and Education Center in Skokie and via Zoom online on September 18. The Illinois Holocaust Museum and the Asia Minor and Pontos Hellenic Research Center (AMPHRC) offered an afternoon of discussion and presentations by renowned scholars and educators as they addressed one of the most tragic and tragic events milestones in modern Greek history.

Titled The Great Fire of Smyrna, the 100th Anniversary Commemoration of the Genocide of the Greeks in Asia Minor, the event featured insights from distinguished speakers as well as eyewitness testimonies in a video clip from the documentary film produced by AMPHRC Lethal Nationalism and in statements read by descendants of survivors of the Catastrophe.

In his presentation, Shirinian highlighted the history of cosmopolitan Smyrna before the disaster, the prosperity, diversity and tolerance that made it a “jewel” and so different from other cities, but also a target for hardline Turkish nationalists. . He noted that we must “never forget this trauma for the Greek and Armenian people.”

Dr Hatzidimitriou spoke movingly as his mother and family survived the 1922 Smyrna fire, the ‘monumental tragedy’ and how a century later Turkish leaders continue to deny the genocide and blame the victims. He also noted evidence of a cover-up by the United States, which he called the “Smyrna Gate”, as commercial interests led some officials to downplay the seriousness of the situation in the reports. Meanwhile, others, like George Horton and Asa Jennings, have taken it upon themselves to help save lives.

Dr Bartrop from Australia mentioned how thousands of Australians lined up 100 years ago this week at recruiting offices to fight Turkey after hearing reports of what was happening in Smyrna. He talked about the Allies and Greece after World War I and the circumstances that led to the burning of Smyrna.

Szany noted that this commemoration is “a way of keeping history alive 100 years after the atrocities were committed” and “our duty is to reflect on the lessons learned.”

It is not enough “to curse the darkness… [we must] illuminate the future…affirm our responsibility to humanity, teach others and be stewards of this memory we share…commit others to never forget,” she said.

Broadcast journalist and media director John E. Davis, Illinois Holocaust Museum board member and AMPHRC board member, served as master of ceremonies for the event, noting the need to “take a stand for humanity”. and raise awareness of the Genocide of the Greeks of Asia Minor to prevent further atrocities. “The Museum stands with the Greek community,” he said, to “light the torch of truth in the world.”

His Eminence Metropolitan Nathanael of Chicago, in his remarks, mentioned that his family came from Asia Minor, had been forced to flee their home and took the first boat they could to find refuge in Greece. He said: “Today…is one of the rare occasions when there are no words to express what is in our hearts, when we are most authentic when we simply stand in silence. before a mystery that is beyond our comprehension, beyond our ability to process, beyond words… Our words fail to capture the depth and horror of this event and yet we absolutely must talk about it, we absolutely must study historical sources, personal accounts and hard facts with scholarly integrity so as never to forget and never allow lies to further profane the dignity of those who have suffered. In other words, we are called to be silent and we are called to speak the truth today, 100 years after the perpetration of the Great Fire.

Among those present, Consul General of Greece in Chicago Manos Koubarakis gave a brief history of the Catastrophe, noting that the 1.5 million refugees who sought to rebuild their lives in Greece propelled the economy forward. in the interwar period, contributing in various ways, economically, socially and culturally to the country. He noted that one of the lessons is that Hellenism must act in solidarity and unity.

Davis also mentioned the Tokei Maru, a Japanese merchant ship, whose captain ordered his crew to unload valuable cargo so he could save people from the disaster, saving more than 800 lives. He applauded the Japanese government and people, inviting a representative from the Japanese Consulate General in Chicago who thanked the Greek people for remembering the heroic humanitarian effort of the Japanese captain and crew.

The Honorary Consul of the Republic of Armenia in Chicago, Oscar S. Tatosian, was also present, and in his remarks he highlighted the visit of United States House Speaker Nancy Pelosi to Armenia and the cease -the current fire with Azerbaijan.

For thousands of years Smyrna was the wealthiest of the cities now located on the Aegean coast of Turkey, an elegant and cosmopolitan city where Greeks, Armenians, Turks, Jews and others lived and worked together – a city known for its religious tolerance.

The Great Fire of Smyrna (Smyrna Disaster) began on September 13, 1922, after the Turkish Armed Forces entered Smyrna, a deliberate act by the Turkish government to destroy or expel the Greeks and any other Christian population. All the Greek and Armenian quarters of the city were destroyed, forcing the population to flee and seek refuge in Greece and elsewhere. Historians believe the number of victims was in the tens of thousands, while the number of refugees exceeded one million. Thousands of Greek and Armenian men were then deported to the interior of Anatolia, where many died in harsh and brutal conditions. After the catastrophe of Smyrna, the Hellenic city founded more than 3,000 years ago, jewel of the eastern Mediterranean, ceased to have a Hellenic community.