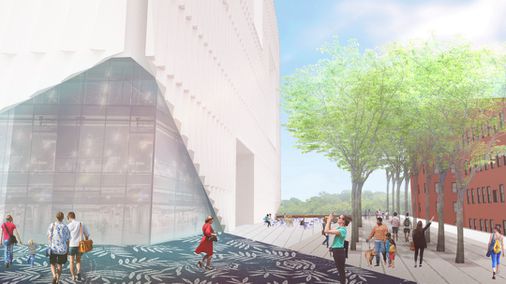 World-renowned shoemaker Stuart Weitzman plans to leave his legacy in Haverhill, the town where he started out, through an eight-story downtown building that will house a shoe museum and cultural center, the Mayor of Haverhill, James Fiorentini.

If approved by Haverhill City Council, the Weitzman Arts and Industry Initiative will purchase the land at 12 Washington Square. The city leased the land from the Merrimack Valley Regional Transit Authority for a bus terminal and parking lot for about 30 years, Fiorentini said in a statement on Friday.

The Weitzman Museum and Cultural Center project would cost around $ 86 million to build, according to the Weitzman Initiative’s proposal submission. It was the only proposal submitted to the city for this lot, Fiorentini said.

Stuart Weitzman is a famous shoe designer who began designing shoes for his father’s “Seymour’s Shoes” company in Haverhill in the 1960s, Fiorentini said. Weitzman’s collection of 300 antique shoes are said to be on display at the museum in the center.

The center would also include a theater, an educational institution, a public gathering space, a restaurant and 51 parking spaces. The building would open in fall 2025, according to the proposal.

“I think Haverhill has a lot of momentum right now… and I think it’s time for a Haverhill renaissance,” said Ben Consoli, board member for the Weitzman Initiative.

All of the board members are “business owners, artists and local residents who adore Haverhill,” Consoli said. They hope the proposed building will help celebrate Haverhill’s history and reclaim the city’s position on the world stage as a leader in the footwear industry, he said.

“With the help and inspiration of internationally renowned designer Stuart Weitzman … we began to develop plans for a building that not only celebrates the history of Haverhill footwear, but also highlights the impact of the shoe. ‘shoe industry on art, culture and fashion, “Weitzman Initiative said in a statement.

“We believe this project is a wonderful opportunity for Haverhill to share its rich history with the world, inspire a new generation of designers and artists, and provide the community with a beautiful space to come together.”

The best online museum and art tours to enjoy from home