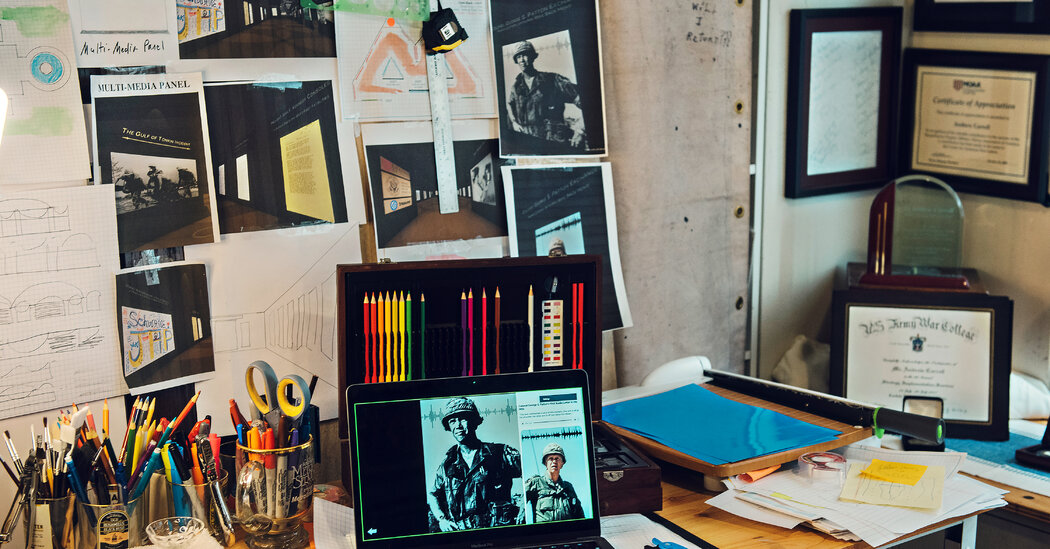 “Hopped him in half, absolutely in half.”

The voice on tape sounded detached, almost terse, part of a time capsule depicting a bloody day in an eternal war that has killed countless fighters and civilians.

US forces were stationed in Vietnam when Colonel George S. Patton, son of the famous WWII general, recorded this chilling message to his wife, Joanne, in 1968. As the troops moved east From Lai KhÃª base in an area called the Catcher’s Mitt, a lone fighter fired a rocket-propelled grenade at an American armored vehicle, killing one gunner and seriously injuring another soldier.

“The tank commander is alive right now,” Colonel Patton said the day after the attack. â€œOne arm is off at the shoulder, the other arm is just below the elbow. The only thing that saved him was his bulletproof jacket.

Colonel Patton paused as an explosion sounded in the background, then went on to tell his wife, “It’s a long and hard war.”

This recording is made public for the first time in the collection of a new history museum devoted to wartime correspondence of the United States military. The American War Letters Museum, as it is called, opened on Sunday, the eve of National Vietnam War Veterans Day.

The institution does not have a postal address – it is a virtual, interactive museum that has been designed to make visitors feel like they are traveling through a physical building with a floor, ceiling and walls.

Its founder, Andrew Carroll, is the director of the American War Letters Center at Chapman University in Orange, Calif., and has edited four anthologies of letters written by servicemen. The first “wing” of the museum is reserved for the Vietnam War, but it plans to expand into other conflicts, with the correspondence he has collected and preserved from the War of Independence to the present day.

Mr Carroll, 51, said he wanted to make the letters, which he called “America’s great unknown literature”, accessible to as wide an audience as possible.

â€œThese letters humanize the men and women who have served and show their sacrifices,â€ he said, adding: â€œThey are incredibly well written, they convey fascinating events from our past and they bring history to life. in a way that resonates with people who think they don’t like the story.

The cost of establishing the museum is covered by a $ 30,000 grant from the National Endowment for the Humanities to Chapman University earmarked for this project. There is no admission fee.

Visitors to the website use a computer mouse or keyboard to navigate a replica of a long gallery with wooden floors, dark walls, and dim, recessed lighting. The letters are displayed as illuminated images and are accompanied by text that appears, offering information about the perpetrators and the background to the war events they describe.

Gallery includes short videos of the 1966 hit song “The ballad of green berets”, military nurses, the experiences of African-American troops, the My Lai massacre, the Kent State shooting and the Pentagon Papers.

Colonel Patton’s son Benjamin Patton said he believed his parents’ exchanges showed how a military family handled anxiety and separation during wartime. In one, her mother warned her father not to get caught up in what she called â€œthe rage of battleâ€.

As the Library of Congress and other institutions collect letters, Mr Patton said he believes Mr Carroll will ensure his parents’ messages remain widely available to the public.

â€œOtherwise, they end up on the ash heap of history,â€ Patton added. â€œSomeone told me that when you lose a life it’s like burning down a library, but that’s not entirely the case when you have that kind of letters and that kind of audio correspondence. “

Carroll has been collecting such messages for more than two decades, motivated by their intimacy and immediacy, their value as historical artifacts, and how they illuminate the lives of ordinary Americans during extraordinary events.

He was an English student at Columbia University who disliked history, he said, until two events in 1989 made him see the power of letters. He lost his own collection of photographs, letters and newspapers – including one from a friend who visited Beijing during the Chinese authorities’ brutal crackdown in Tiananmen Square against pro-democracy students – when a fire ravaged his father’s house in Washington, DC

Soon after, an older cousin handed him a letter he had written decades earlier while serving in the United States forces during World War II. In it, cousin, James Carroll Jordan, describes to his wife, Betty Anne, walking through Buchenwald concentration camp shortly after its liberation from the US military in 1945. “He describes firsthand the horrors of the Holocaust, â€Mr. Carroll said. “The letter made it so much more real.”

In 1998, he asked unionized advice columnist Dear Abby to publish a call for Americans to donate War Letters to him for preservation. Thousands of people responded, turning Mr. Carroll’s apartment in Washington, DC, into an impromptu repository filled with white plastic mailboxes.

These days, a corner of this apartment has been transformed into an ad hoc design studio, with schematics for the museum and other designs displayed on four wooden planks.

In the future, each wing of the museum will also include around ten letters and videos, on permanent display, chosen for their emblematic value. Some material will come from the 160,000 pieces of historical war correspondence he collected at Chapman, ranging from an 18th century pen-and-ink missive urging the British colonies in America to revolt against the crown at a letter in 1918 from a military man describing a brush with a future novelist: â€œA lieutenant of the Red Cross. named Hemingway, who is from Oak Park.

The aim is also to include letters that will cover wars, organized by subject: love letters, for example, those censored by military authorities and letters describing war experiences by well-known participants, such as l ‘writer Kurt Vonnegut.

Beyond that, the families of veterans will be authorized to create private galleries, accessible to themselves.

Mr Carroll said he started with one of America’s most controversial conflicts – a war that has killed more than 58,000 Americans and, by some estimates, up to 2 million Vietnamese civilians, was promoted by President Lyndon B. Johnson as a heroic struggle against communism – in part because the letters of that time reflected the mix of policies, principles and emotions that are still present in debates about the use of military force .

â€œUnlike WWII and WWI, the key thing about Vietnam is that letters weren’t censored so you could have these complicated conversations,â€ he said. â€œThe content of the communication was, I think, so much more layered and so much richer than in previous conflicts. “

The Vietnamese wing’s private correspondence traces the arc of the war and presents the perspectives of many Americans, including those who have questioned the conflict or expressed anguish at the violence. In a letter, Warrant Officer John H. Pohlman, a former Peace Corps volunteer, tells a friend that his political views on the war had been subsumed by the simple desire to survive.

â€œI developed this mental tunnel vision during a mortar attack the first night I was here,â€ he wrote. “Something happens to you when you realize that there are people out there who don’t like you.”

The collection also includes the dark message inscribed by Pvt. Ralph Knerem on part of a seven foot roll of toilet paper: â€œMy body is numb. I don’t care about anything here.

The end of America’s involvement in hostilities is marked by a series of 1975 cables in which the United States’ ambassador to South Vietnam, Graham A. Martin, pleaded with Brent Scowcroft, then deputy adviser to national security, to help him evacuate the people of Saigon as North Vietnamese. advanced forces. In a cable, riddled with misspellings that may reflect the urgency of its composition, Ambassador Martin, citing the pain of leaving people behind, said: â€œMaybe you can tell me how to make it so. that some of these Americans are abandoning their half-Vietnamese children, or what the president would look like if he ordered that.

Among the most reviewed messages is that of Bill Clinton letter in 1969, when he was a Rhodes Scholar at Oxford University, thanking a colonel in the Reserve Officers Training Corps for “saving” him from conscription. Clinton added that governments “rooted in limited parliamentary democracy” should not “have the power to have their citizens fight, kill and die in a war they might oppose.”

One of the most haunting is the simple, unpublished note that Lance Cpl. Arthur Bustamante, a Marine, wrote during the watch. The image of Lance Corporal Bustamante appeared on the cover of Life magazine in 1967 which included photographs of Con Thien, a US base near the demilitarized zone that separated northern and southern Vietnam. But he was not identified by name in the magazine, Carroll said.

Then, last year, Carroll said he received a letter from a man named Edward Quesada, who wrote that the Marine on the cover of the magazine was his brother and provided letters from Lance Corporal Bustamante discussing Con Thien.

A message carefully composed in black pen on yellow lined paper and dated November 12, 1967, would be his last letter before being killed in action two months later, at the age of 22. Lance Corporal Bustamante wrote to his mother: 4 am â€, and described the incessant rain. He looked forward to his return to the United States.

â€œMy time here is running out,â€ he wrote. â€œI don’t know what I’m going to do the first thing when I get home. But I will like it.

York residents invited to reveal their treasures for an online museum