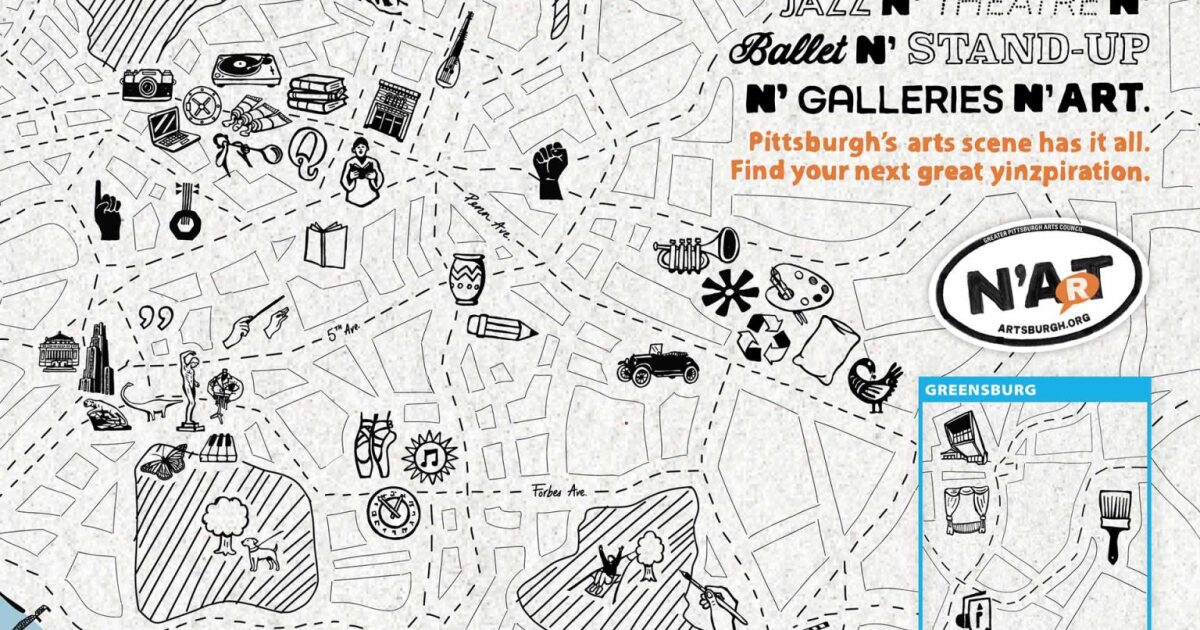 With thousands of people still infected every week in Allegheny County alone, the pandemic isn’t over yet — and arts groups’ struggles to win back audiences lost to the shutdown and subsequent surges aren’t. no more.

The Greater Pittsburgh Arts Council, which participated in its Restart the Arts campaign last year, is returning with an initiative called N’Art. With a program whose name plays on Pittsburghese, the advocacy group is taking a new approach to educating people about the breadth of Pittsburgh’s arts scene and encouraging them to take advantage of its offerings.

GPAC also printed a series of four fold-out maps, each highlighting dozens of arts groups and locations in a different section of Pittsburgh: Downtown and North, South, and East. In all, about 140 locations are represented on the maps, from Homewood’s Afro-American Music Institute to the Carnegie Museums in Oakland and Off The WALL Productions in Carnegie to the Pittsburgh Banjo Club on the North Side.

“Our hope is that people in and around the city will find something new and in doing so, support the arts community, as attendance is still lower than it was before the pandemic,” said Kristen Wishon, who manages N’Art for GPAC.

And indeed, while most performing arts troupes resumed their full indoor seasons last fall — and museums reported attendance rebounded even earlier — many performance groups say audiences have been reluctant to return, whether due to health issues or simply because he is out of the venue. habit.

The promotional campaign, which began in August and continues through September, includes paid placement on local news sites and blogs, as well as spots on WQED radio. While the list of promoted groups includes the Pittsburgh Ballet Theater, Pittsburgh Arts & Lectures, and the Mattress Factory Museum, most are smaller, such as Arcade Comedy Theater, Harambee Ujima Black Arts and Culture Association, and Pittsburgh Camerata. Wishon said GPAC prioritizes small and medium-sized groups and those that serve the BIPOC and LGBTQ communities.

“We wanted to make sure that the organizations that had less capacity and less resources were really the ones getting help,” she said.

The maps – GPAC has printed 3,000 in total, including 750 from each part of the city – will be distributed to some 230 coffeeshops, restaurants, boutiques, arts venues and other venues. The initiative’s website includes digital versions.

Finally, the campaign includes “N’Art” oval stickers. Wishon said that for four weeks starting Sept. 19, anyone a GPAC staff member sees sporting a sticker (on their bumper, water bottle, or elsewhere) will be eligible for free tickets to a local arts event.

N’Art is supported by the Henry Hillman Foundation, FedEx Ground and the Pittsburgh Cultural Trust.