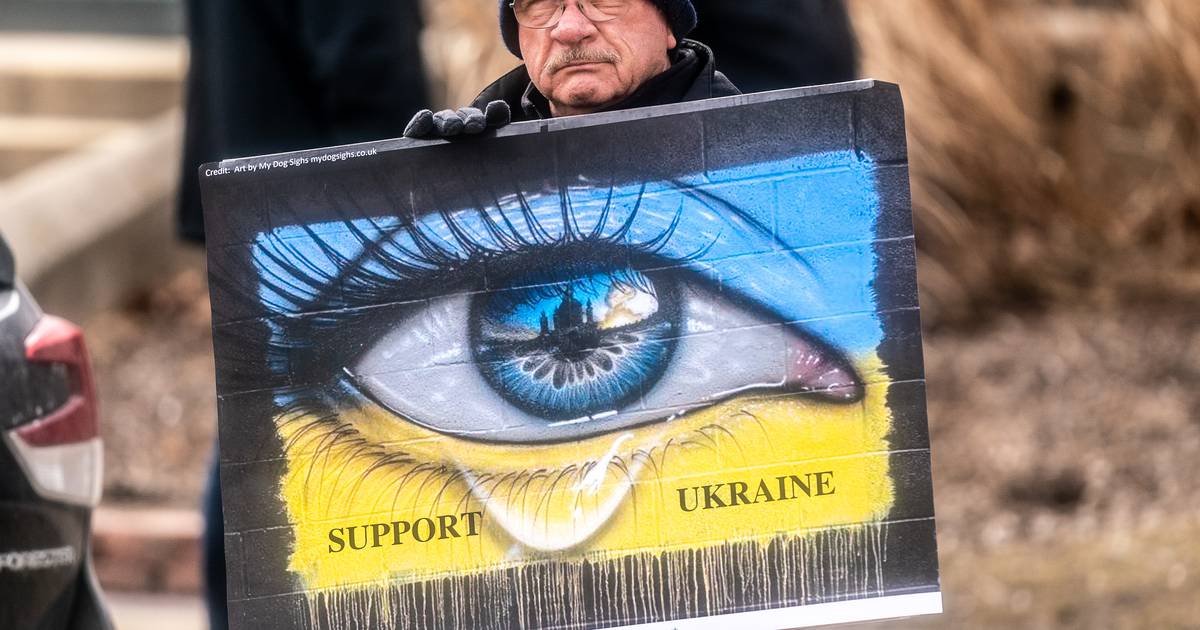 During National Poetry Month, as war continues to rage in Ukraine, it seems fitting to share the work of Ukrainian poet Taras Shevchenko. Born into a family of serfs on an estate in what is now central Ukraine during the Russian occupation, Shevchenko wrote “Calamity Again” in 1859.

He could have written about today.

“My God, another calamity! It was so peaceful, so serene; We had just begun to break the chains That bind our people in bondage When halt! Once again, the blood of the people is flowing…”

And then there is the writer Borys Humenyuk, 57, who lives in western Ukraine. His poem, “When You Clean Your Gun,” is about a neglected victim of war: humanity.

“When you clean your gun / When you clean your gun over and over / When you rub strong-smelling oils on your gun / And protect it from the rain with your own body / When you swaddle it like a baby / Even if you I’ve never swaddled a baby before – / You’re only nineteen, no baby, no wife – / The weapon becomes your only relative / You and the weapon only one. … / Your hands, your face, your hair, your clothes, your shoes – / No matter how much you wash them – smell like gunpowder / They smell like war / You smell like war / You and war don’t be one.

I developed a fondness for writing and reading poetry in high school and college. Unlike everything else, it distills emotion. The best examples rely on the understatement to sum up how everyone feels. It connects at an almost primary level.

“I write because… / Ukrainians deserve the world’s collective compassion and support as they fight to save their country, their livelihoods. / Butchers, bakers and candlestick makers face tanks, bombs and the nuclear threat. / no monument is tall enough or wall long enough to fully capture the depth of their sacrifice in the name of freedom. / we should honor their heroism and remarkable show of solidarity in the face of overwhelming odds. / Far from being reckless, these ordinary people are extraordinarily brave. / our collective conscience compels us to do something to help. / Offering those heartfelt words of encouragement is one thing I can do.

More than 5 million people have fled Ukraine since the invasion, many of whom have gone to Poland, Romania and Hungary. And countless numbers of their fellow Ukrainians have been driven from their homes or killed in their beds.

I joined a growing number of Americans who chose to fly under the Ukrainian flag in solidarity. Brewer Banner Designs in New Bedford, Massachusetts, donates half of the proceeds from every Ukrainian flag it makes and sells to Doctors Without Borders. For more information, visit www.brewerbanner.com.

The Milwaukee-based National Bobblehead Hall of Fame unveiled a bobblehead of Ukrainian President Volodymyr Zelenskyy. Of every $30 Zelenskyy bobblehead sold, $5 will be donated to GlobalGiving’s Ukraine Crisis Relief Fund. For more information on these bobbleheads, which are expected to ship in July, go to bit.ly/ukrainebobble.

Charitynavigator.orgthe Better Business Bureau (give.org) and charitywatch.org are among the watchdog organizations that control the myriad charities responding to the war in Ukraine.

The final program for the 36th annual Sampler Lecture Series will take place at 3 p.m. Monday.

“Vibrant, Resilient, Still Here: Contemporary Native Americans in Illinois” will be presented by Pamala Silas, a member of the Menominee Tribe of Wisconsin and descendant of the Oneida Tribe, works for Northwestern University as Associate Director of the Center for Native American and indigenous research.

Silas will discuss the history of Native Americans in northern Illinois, as well as their role today. Explore how the public learns about and perceives Native Americans, discuss current demographics, community issues and values, and engage through recommended readings and resources.

This program is made possible by a grant from the Illinois Humanities. For more information, visit www.GotHistory.org.

• Kurt Begalka is a trustee of the McHenry County Historical Society & Museum in Union. He can be reached at [email protected].