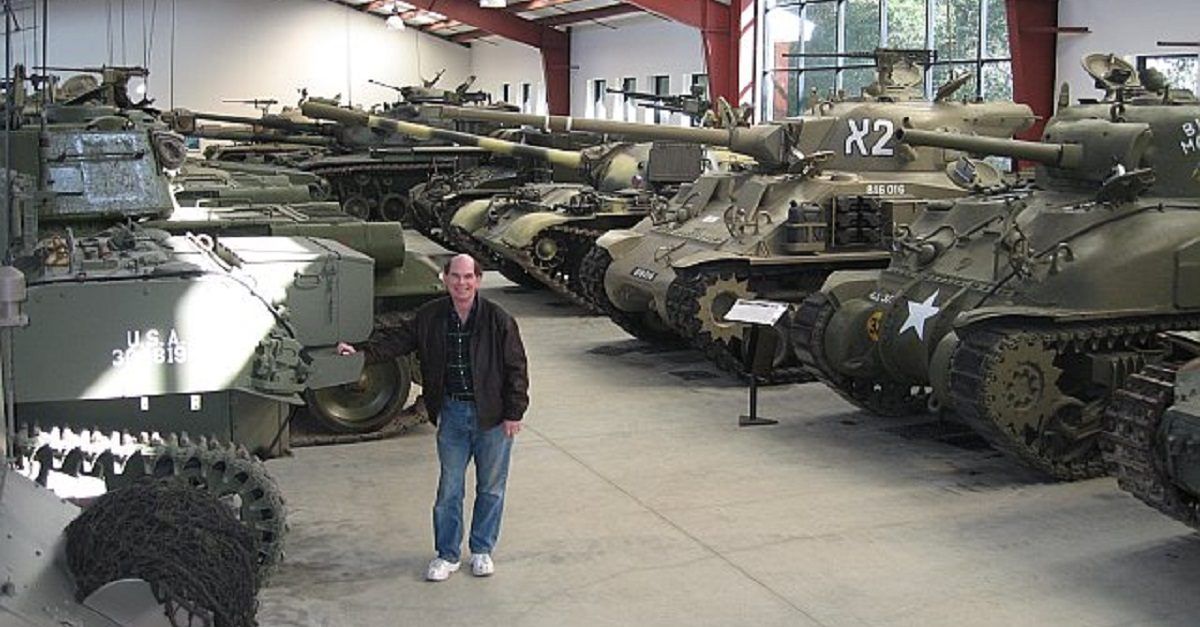 The army uses monstrous vehicles that can handle the air, sea and land and help soldiers protect their country. Even though these machines aren’t toys, they do look like vehicles that are fun to drive or fly. Fortunately, there are hundreds of military vehicles that you can own. You can even get a tank, although you won’t be able to take it on the road because no one will give you the license to operate.

You might think military vehicles are expensive, but the prices range from affordable to incredibly expensive. There are tanks, cars, and even planes for sale if you look in the right countries. You can even find vintage units. Sure, you can get a custom civilian machine with fake gear, but nothing beats a real tested military vehicle. In addition, you will have the chance to restore a magnificent war machine. Here are the largest private collections of military vehicles in the world.

Collection owner Kevin Wheatcroft has been collecting military vehicles for 30 years. It is one of the largest private collections in the world and the largest in the UK. It has 200 items, including 130 vehicles, of which 88 are tanks. Most of the vehicles come from Germany, Great Britain and America.

Jacques Littlefield was the founder of the Military Vehicle Technology Foundation known as the Littlefield Collection. It had many military vehicles, including two M4 Sherman tanks, a Panther tank, and an SS-1 Scud launcher. It is estimated that he had 220 military vehicles to his credit. He often showed his collection to visiting students.

The National Military Vehicle Museum is an Australian military automobile museum founded in 1993. The museum is unique in that the majority of vehicles are owned by private members of MVPSSA and most machines are kept in working order. . The collection is used in Christmas contests and many support events (eg Anzac Day).

The Jon Phillips Armor Collection is a huge private collection of military machinery owned by Jon, a WWII vehicle enthusiast in England. Highlights of his collection include a restored original Sturmgeschütz III Ausf. D, a restored Volkswagen Schwimmwagen and a Panzerkampfwagen III replica. He often shares restoration processes on social media.

We all love a bit of history, but some of us take that passion a little further than that. Allan Cors “has spent the past 30 years putting together a collection of over 100 tanks, 9/11 artifacts, and assorted military memorabilia. Allan’s private collection is on permanent display at the National Museum of Americans.”

The Muckleburgh collection resides in a former military camp in England. Even though it is open to the public, it is private property. The vehicles and the facility have been used for films, dramas and documentaries. Work tanks include the Stuart M5A1, Soviet T-55, Panzer P-68, Chieftain, and Canadian-built Sherman tank.

Herman Rowland bought 7 military vehicles, and this was the start of his extensive collection. Of all the vehicles he owns, Patton’s command jeep is the most popular. His collection also includes an “Achilles tank from World War II, one of only six remaining in the world, and a Marmon-Herrington tank, one of only three in the world”.

Dan Starks, owner of a huge military collection, said, “I’ve been interested in military history since I learned to read. I bought a number of tanks at auction, including mannequins fitted with authentic WWII uniforms. Many vehicles, in various repair conditions, are distributed among several restoration companies. ”

Rob Lowden has a large collection of military vehicles which can be found at the Australian Armored Vehicles and Artillery Museum. The collection includes machines from both world wars. It consists of 150 armored vehicles, which cannot be found anywhere else in Australia. It is the largest collection of its kind in the southern hemisphere.

An interest in military vehicles runs in the Boys family. He is an avid collector and car enthusiast who owns one of the UK’s largest private collections of military vehicles. He said that all models are looked after by specialists. His most valuable collector’s item is a Ferret Scout Car.

Michael Dezer is an Israeli-born real estate developer who began collecting military vehicles at the age of 16. It has a huge museum which holds the majority of its collection. The exhibition space presents more than 1,000 vehicles. One of the most valuable possessions is a Soviet GoldenEye T-55 tank.

RELATED: Check Out These Creepy Military Vehicles Used By The Germans In WWII

Kevin Purcell’s collection of military vehicles is known to truck enthusiasts. You may have seen some of his valuables at Sylvia’s Gap convoy. You’ll run out of fingers when trying to count FWDs, Jeeps, Dodges, Bren Gun Carriers, MUTTs, Kaisers and Land Rovers. He owns a 1942 Diamond T original from the former Australian Army.

A Belarusian, Vladimir Yakushev, searched for tanks littered all over Belarus and restored them. He said: “We raised two brewed 38

Mr. Vadnjal’s obsession with military vehicles became a hobby in 2000. He now owns the largest collection of WWII vehicles known to exist. It has 60 military vehicles, 27 of which are exhibited in various museums. His machines regularly participate in parades, costing him up to $ 10,000 in fuel.

In a town of Wasta there is a seemingly simple building. But come in and it’s like stepping back in time. It is a private collection of military vehicles and armor that belongs to Tom rancor. It also owns a Marine Corps A4C Skyhawk ground attack aircraft that flew Vietnam-era missions.

NEXT: Check Out These Cool Pictures Of Abandoned Tanks

The police chase eventually led to the police disarming the driver armed with a knife.

Chris is a skilled reader and writer. He has written for numerous publications including TheRichest, TheClever, TheQuiz, and ListVerse. Cars are his passion.