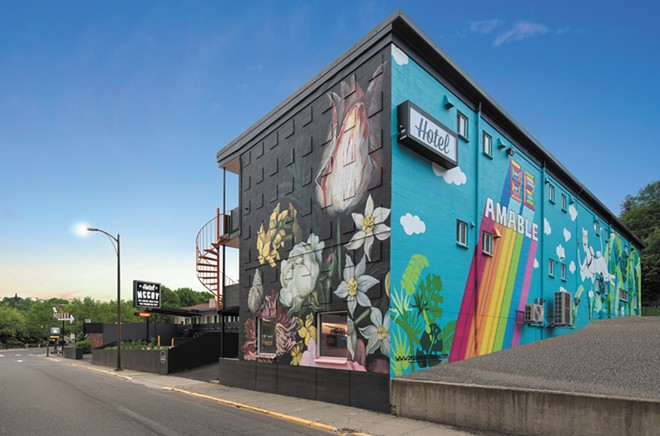 J here is a new image in development of the Pullman visual arts scene, which adds an additional focal point besides Washington State University and its venerable Jordan Schnitzer Museum of Art.

In recent years, several new arts-related entities have sprung up in the city: the new non-profit Pullman Arts Foundation, the avant-garde McCoy Hotel for the arts, the Terracotta Arts Studio and a new art gallery. Added to Pullman’s existing venues, these newcomers help showcase the growing arts community in college town.

Two years ago, Pullman had few artistic entities, beyond the public works of art on the WSU campus and in its museum. Studio 509, located inside the Gladish Community & Cultural Center, offers art classes for all ages, while Art Niche is an artists’ cooperative.

Pullman’s Arts Commission still exists, although six of the seven board positions have remained vacant since a kerfuffle ensued over a seemingly controversial public artwork in 2020.

“Part of the genesis of [Pullman Arts Foundation] was, honestly, the difficulty of creating some kind of public art project here in Pullman that was connected to the Black Lives Matter movement,” says WSU art professor Joe Hedges, who co-founded the nonprofit with his wife and fellow artist, Jiemei “May” Lin.

The story of the BLM mural, which played out in the press and on social media, involved a back-and-forth between the Pullman Arts Commission and the city council. Caught in the middle were local artists and community members who wanted to draw attention to systemic racism following the 2020 killing of George Floyd by Minnesota police.

From left to right: Joe Hedges, Jiemei “May” Lin and Sarah Barnett.

After the council reversed course even on the idea of a mural, the Arts Commission was practically disbanded. Meanwhile, Hedges and Lin set up the Pullman Arts Foundation (pullmanartsfoundation.org), tapping artist and fellow WSU educator June T Sanders, and Pullman School Pantry program co-founder Margaret “Meg” Gollnick to serve on the board.

Quickly, the grassroots group raised the necessary funds and secured another location for the BLM mural, the old Mimosa Building on Main Street near Pine.

In addition to the murals at Kamiak and Jefferson Elementary Schools and the Palouse Discovery Science Center, the foundation also realized it could meet other needs of artists, arts supporters and the community at large, said Hedges.

“We had started to meet people who were really engaged locally and who really cared about the arts,” he adds.

The foundation has created arts-centric get-togethers, and last April it stepped in to help organize an art festival, dubbing it the Sunset Artfest and working in conjunction with Lumberyard, Art Niche and Hotel McCoy.

HMcCoy hotel is the second of two boutique hotels of the Preface development company (its other hotel is in Tucson), and it has proven to be an ideal partner in many Pullman Arts Foundation initiatives.

“We want art to be accessible to people from all socio-economic backgrounds.”

Thus, the Pullman Hotel is full of art, inside and out. In addition to five exterior murals, the hotel features paintings, prints, and other artwork in its guest rooms and shared spaces, all for sale.

“We are a commission-free hotel,” says Rochelle. “So everything we sell goes directly to the artist, which is really good business.”

Murals include the vibrant “Be Amable” by Jaz Gonzalez Cerda on the Paradise Street side of the hotel, as well as murals by Lin, Hedges, Rebecca Lloyd, and Sarah Barnett.

Barnett credits the mural experience with helping her stay in Pullman after completing her MFA at WSU, she says.

“I think the collaboration aspect has been very valuable to me as a person,” says Barnett, who also stayed on to take up a position as an adjunct art instructor at the university.

Like Barnett, Candace Baltz formed a strong connection to the university while she was a student. She met her husband in the 90s when they were both college students and he was editor of the WSU student newspaper, The Daily Evergreena title she would eventually hold as well.

Like a boomerang, the couple left and came back. Left and back.

“During the pandemic, I think like a lot of people, we’ve had the chance to think deeply about ‘what do we want in life? “” The answer for the couple was Pullman.

And for Baltz personally, the answer was also pottery, like the joyful and healing experience of being in a clay art studio while growing up in Oregon.

“Spending unstructured time in a studio, day in and day out, and working under the guidance of a professional potter” had a profound impact on her, Baltz says. “It prepared me for life.”

“My hope is to pay this forward and [help others] to do that kind of reconnection with ourselves and with each other,” says Baltz.

The Great Gallery and Greystone’s Gifts
(greystonegrandgallery.com) is the newest addition to Pullman’s art scene, slated to open in October.

When his wife, Holly, was hired as executive director of the Pullman Downtown Association, says gallery founder Desirée Greystone, it cemented his decision to seek a studio in town.

The next thing Greystone knew, it was signing the contract for a two-story, 8,000 square foot building that is now being transformed into a gallery for local, regional and international artists.

“I love Pullman and am thrilled to be part of the growing art scene,” says Greystone.

“Selfishly, because we live here, we really want to see the arts thrive here [and] of course not just for us but for other members of the community,” says the WSU art professor.

“We really believe that having artists around and having public art to see just makes a community more vibrant, richer, and provides opportunities for conversations.” ♦

On this International Day of the Girl Child, here are 4 Colombian and community programs to empower young women | Colombia